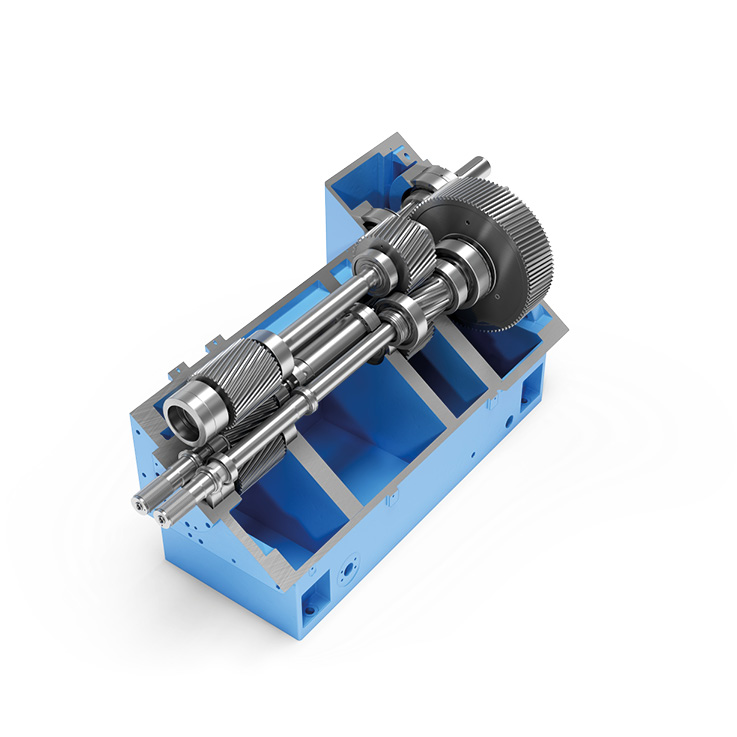 In response to the steady trend toward higher and higher outputs from extrusion facilities, which necessarily involves increasing torque, Eisenbeiss has consistently continued to refine its gear systems for parallel co-rotating extruders.

The Speed Star® load distribution system with two distribution shafts has already proved its worth hundreds of times in production around the world has been retained, while the gear system has been upgraded in terms of performance achievable without compromising on reliability. With the latest generation of Speed Star® gear systems Eisenbeiss achieve torque densities up to 20 Nm/cm³ per output shaft.

An ingenious gearbox lubrication system ensures the highest efficiency and leads to maximum safety in all operating conditions. High efficiency is enabled thanks to defined oil flowrates per tooth intermesh and bearing.

The gear unit consists of a single-piece housing without any joins, completely eliminating potential leaks. On top of the gearbox there is a large inspection cover which is ideal for inspecting the gears.

Torques of up to 20 Nm/cm³ per shaft are possible at operating speeds of up to 1800 rpm. This provides your customers with a much higher production output. The gear unit consists of a single-piece housing without any joins, completely eliminating potential leaks.

The proven Speed Star® concept is also used in food extrusion. Due to the different power and speed requirements compared to compounding, we have developed our own gear units for this industry sector.